Lion Fight 66 takes place on 21 May in Topeka, Kansas, USA. The event is being streamed worldwide via UFC Fight Pass.Official Lion Fight 66 press release below. 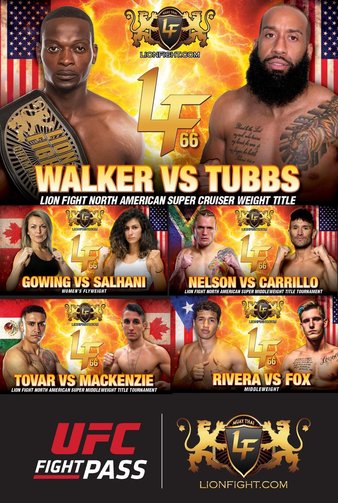 Tickets for Lion Fight 66 are available at .

The new North American Title Tournament will take place in the Super Middleweight division and feature three veterans and one rising prospect.

The first semi-final will pit Mexico’s Heriberto “Rudo” Tovar (8-2) against promotional newcomer Jake Mackenzie (2-0) from Canada. In the second semi-final and Lion Fight 66 co-main event, Kansas’ own Cody Carrillo (6-3, 1 NC) will clash with Lorawnt-T “Smash” Nelson (12-3), who is originally from South Africa, but now fights out of Denver, Colorado, USA.

“Our first North American Title Tournament – the Heavyweights – was a resounding success at Lion Fight 64 and we are very excited about that upcoming final between “Bazooka” Joe Stripling and Warren “Destroyer” Thompson,” said LION FIGHT CEO Scott Kent.

“That first tournament gave us a great path that we can follow for the future and it is a great next step we are taking with the Super Middleweight tournament. I think we’ll see some terrific action-packed fights in the semi-finals paving the way to an excellent final this fall.”

Tovar made his LION FIGHT debut in a hard-fought decision loss to title-eliminator bout against Enrico Carrara, who would go on to win the Lion Fight World Light Heavyweight title. The native of Hidalgo will now move down to a more comfortable weight class to enhance his striking prowess. He step in against Mackenzie, a multi-time national champion and two-time IFMA bronze medalist.

Like Tovar, Nelson moves down to a weight class better suited for his striking power. The rugged Nelson stood in against light heavyweight contender Washington Dos Santos at Lion Fight 63, dropping a decision but is ready to emerge in the super middleweight ranks. He’ll go up against Carrillo, who came into Lion Fight 64 as an underdog against rival Kansan Chance Thackston yet he battered his foe in a torrid first round. Carrillo appeared to have an earned an opening-round TKO win, but the bout was later ruled a no-contest due to an officiating error during the 10-count.

The North American Super Middleweight Title Tournament rounds out the main card for Lion Fight 66 with the three other bouts previously announced: