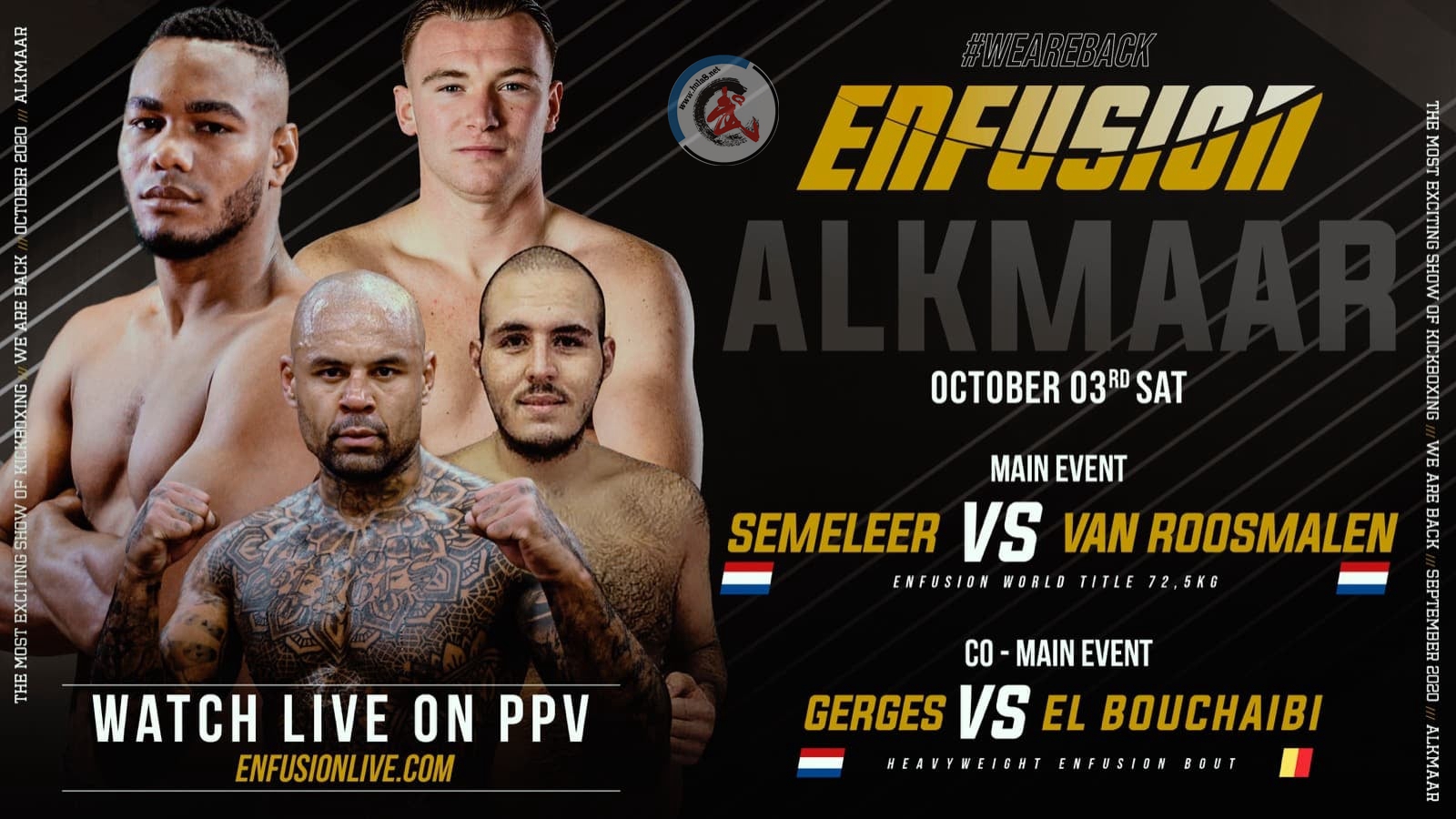 Endy Semeleer won the Enfusion 72.5 kg World Title with a five-round decision over Nordin van Roosmalen. Semeleer knocked van Roosmalen down with a knee to the head in round one, and controlled the bout with his boxing skills and movement.

With the victory, Semeleer holds both the Enfusion 75 and 72.5 kg World Titles. The 72.5 kg belt was previously held by Tayfun Ozcan.

Hesdy Gerges made a successful return to kickboxing with a first-round TKO win over Mohamed el Bouchabi.

Gerges looked in better shape than in recent years, and patiently pressured the Belgian. Gerges threw a couple of punches then landed a hard low kick.

el Bouchabi grabbed the ring rope with his gloves to keep his balance before he went down in pain. It was the first kickboxing win for Gerges since he defeated Tomas Hron by decision at GLORY 41 in May 2017.

Gerges’s last kickboxing bout before tonight was a no-contest against Badr Hari in March 2018. He fought in MMA for Bellator before returning to kickboxing.

Martin Terpstra wore down previously unbeaten Kevin Tariq Osaro to win a unanimous decision. Terpstra was too big and strong for the Nigerian, landing some good knees and punches to the body on the inside, and scoring three counts to pick up a clear win.

In the main event of the Enfusion Talents portion of the event, Sarah Gobel won the Enfusion Ladies -67 kg World Title with a surprising decision victory against Sheena Widdershoven.

Gobel pushed forward with punch and kick flurries and looked to score with knees at close quarters. Widdershoven defended the knees well, and landed the cleaner punches and seemed to win 3 or 4 rounds based on the stronger blows.

The judges favored Gobel’s work rate, and she repeated an earlier victory over her rival to win the Ladies -67 kg Title.

Karim el Amri’s low kick attack led him to victory against Sinan Durmaz. el Amri scored a knockdown and eight count in the last round but couldn’t finish the courageous Turk.

Somalia’s Mohamed “The Pirate” Achmed stopped Morocco’s Hicham Arredouani with a big left hook in the final round of their 60 kg battle.